Several years ago I went in this fantastic trip with my sister and her husband, which I “published” on a different site. So, as I am soon to undertake another southern African adventure, here’s a re-revisit, in several parts.

2013 (I think)… This trip to Namibia and South Africa started from London Heathrow Terminal 5 to Windhoek (WDH), Namibia, via Johannesburg (JHB). It’s a 10½ flight to JHB, overnight, thus not too unpleasant, then 2 hrs. to WDH. Windhoek International airport is always an “experience” and not the most welcoming entry into a country. This was reflected somewhat by the Captain, who made the following statement when we reached the stand: “Folks, this is Namibia, we are expecting something to happen, we just don’t know what or when!” Namibia is a country of contrasts, with natural beauty at the top of the list, while the concept of time stands still, in many different ways. Here you need patience – the concept of time is non-existent.

Windhoek itself is a small city, but it is becoming more and more commercialised every time I visit – in town everybody is in a rush, as if they are all in a rush to get out into the wide open spaces again. Items and food are becoming more expensive, but still reasonable when compared to prices in the United Kingdom. In the restaurants the portion sizes are enormous!

For the first few days of the holiday I am spending a few days Kappsfarm near Windhoek. I wake up early and, if lucky, still get to see the last of the night sky, including the Southern Cross and Orion constellation. Sunrise is at 7 am, with a coffee and my friend Knatters the cat (knatters is colloquial for testicles, he does not have any).

Then I spend about an hour just watching the sunrise and waiting for the sunbirds to come and feed on the aloe and cactus flowers in the garden. There are at least three sunbirds that visit regularly; South Africans often call these sugarbirds, from the Afrikaans name “suikerbekkie” (sugar beak). There are also weaver birds starting to build nests and yesterday I saw some of them fighting with a sunbird for feeding time on the cactus. Some vultures have also been spotted, but too far away for a decent photograph, and I have also heard a fish eagle in the distance. 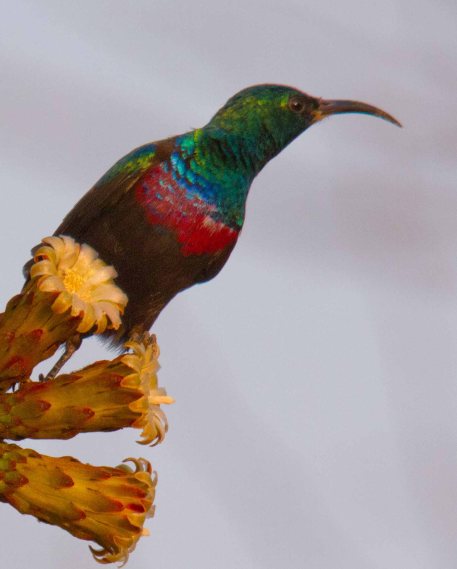 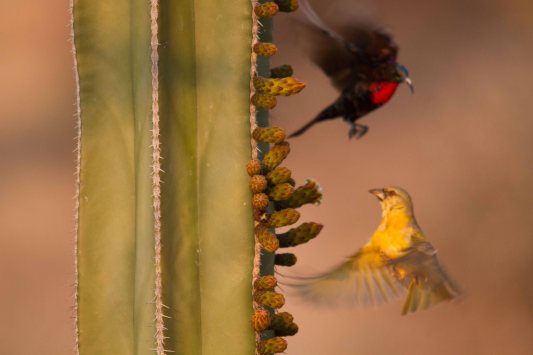 Sunbird and weaverbird squabbling over dinner

Every now-and-then a Cessna flies overhead; tourists going on safari or a farmer’s family going shopping? Once a day, in the distance, I can hear the train on its slow trip to Gobabis in the east; stops are by request with no scheduled time-of-arrival.

The next part of the trip is to Cape Town through the Namib Desert, Richtersveld and west coast of South Africa. It’s about 1,000 miles on the tar road, but we plan to take the “back” roads to see the “real” Namibia. Having done several trips through the Namib Desert and Kaokoveld already, I have a fair idea of what may come, but this country is full of surprises. There is a local saying that when God made the earth he had several pieces left over, and these he put together to make Namibia. The geology and rock formations are amazing, the golden veld hypnotic in its beauty. We are taking a Range Rover with a caravan – I am expecting somewhat of an adventure. In the meantime, the caravan needs to be fitted out (lights, fridge, microwave) and stocked up for the trip, so most of the day is spent in the workshop. The latter is a delight for a Land Rover fan (I am referring to the off-road types, not Chelsea tractors). The midday heat is quite harsh, and everything and everybody takes a break.

The golden glow of the grass, the twittering of the birds, watching the flowers open and close as the sun passes overhead – life in the slow lane.