Sunday: We left our riverbed campsite to continue south towards the Namibia/South Africa border via a quick refuel and re-stock in the zinc-mining town of Rosh Pina. The Orange river is the border at this point and we crossed over at Sendlingsdrif on a small ferry.

The signposting was confusing and we ended up driving into the Richtersveld Park rather than “skirting” around it. The road was marked 4×4 on the map, but so were normal gravel roads, thus we were not too concerned and continued on our merry way. After two mountain passes, as marked on the map, we were quite relieved that all had gone well.  It was quite hot, thus necessitating a break and some “padkos” [food, kos, for the road, pad; afrikaans].

Time for a break, and some relief from the sun

We were due a little surprise, as we had to cross two more substantial passes, which were not indicated on the map, before exiting the Richtersveld park. The latter passes were a bit hair-raising, as we were on a narrow two-track path climbing or dropping hundreds of meters in a few kilometers. With a caravan in tow!  I have a fear of heights, so there was a fair bit of butt-clenching! A little surprising, as we had a seemingly detailed 4×4 map; in hindsight, the map did indicate that normal gravel roads were also 4×4 tracks (these are regularly used by “normal” cars).  In 7 hours we travelled about 50 km.

One of the narrow, unmarked mountain passes in the Richtersveld.  The road on the left of picture continues in the valley below

Parts of the park looked extremely dry, even more so than the Namib desert,  with different geology and flora (quiver trees, aloe). Visible wildlife was virtually non-existent, with a few goats and sheep, this is communal grazing land. Just after sunset we made it to the park gate, which was fortunately still open, and continued on our  previously planned route. About 2 hours later, and we were camped at Brandkaros along the Orange river.

Monday: Heading to Alexander Bay, then south towards Port Nolloth. This is daimond mining region and we had to sign-in several time; The focal point of Alexander Bay seems to to be the bottle store (i.e. booze), as interpreted from road signs, while Port Nolloth also has little to offer. What opportunities do these people have for further education, development etc.? Near Hondeklipbaai we found out that there was a new park, the Namaqualand Coastal Reserve (4 years since opening but not on our “new” maps). Nobody to be found at the gate and so after a bit of deliberation and consultation with a local lodge owner, we decided to enter the park. Not too far and we found a wonderful campsite next to the sea, Boulderbay, where we had our first “long-drop” toilet. Yahoo!

A chocolate-coloured springbok spotted in the Namaqualand Coastal Reserve 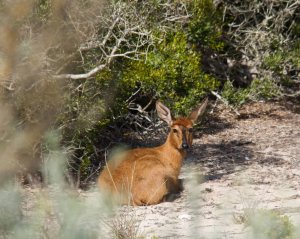 A “bokkie” in Namaqualand Coastal Park

Tuesday: The trip south to Groenrivier was partly deep sand and a bit difficult, though do-able with deflated tyres and some “oomph” under the bonnet. The scenery was typical Namaqualand spring with fields of flowers – so, so beautiful. The flowers were amazing and we stopped a lot before getting to Garies. As we were running a bit late we had to take the tar road to Cape Town, the grey clouds and rain meeting us near Clanwilliam. In Citrusdal we found a nice campsite, with a friendly cat, noisy cockerels, a horse, and a hen sitting on eggs in the toilets. 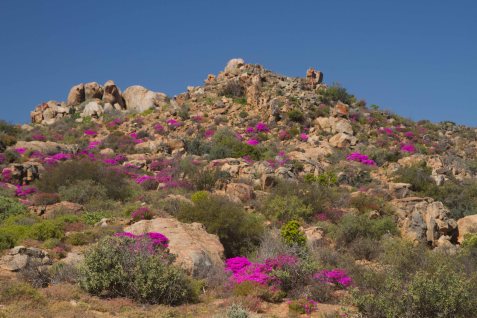